The Importance Of Apologetics

Both the Old as well as the New Testament repeatedly emphasize that defense of faith is an important part of spiritual life. This is why both the Testaments contain numerous apologetic passages. The Jewish and the Church Fathers also understood these benefits, and that is why they devoted considerable time to refuting arguments brought against the Christian faith.

A perusal of the apologetic writings of the Bible and the Fathers would show that the nature of the attacks changed in each generation, and that the reply had to be tailored to meet the needs of each generation. In spite of this changing approach and emphasis, the purpose of apologetics has remained unchanged for all the past millennia.

THE UNCHANGING PURPOSES OF APOLOGETICS: The methods and priorities of Christian Apologetics keep changing with time, but the aims remains the same, and they are:

1-To refute all the accusations that are brought against the Bible and the Christian faith.

3-To remove the sincere doubts in the hearts of believers and unbelievers, so that the hindrances to the growth and establishing their faith are eliminated.

4-To provide SUFFICIENT evidence for achieving the above goals. It is necessary for the apologist to understand the difference between sufficient and total proof.

Because man is finite and limited in his knowledge and perception, total proof is never possible for anything. Total proof is possible only if every case in the world related to the subject is examined. This is humanly not possible. This is why scholars do not insist upon total proof for anything in any branch of science or history. Rather, everything is decided on the basis of sufficient proof. The same is the case with Christian Apologetics.

What Can Apologetics Do

Christian Apologetics is a constantly developing subject, with each day’s arguments becoming more and more powerful than the previous days. In a fast expanding subject like this, people can often forget or overlook the role played by that subject. This is specially apparent in Christian Apologetics.

Thus four different ways of thinking can be seen from time to time about Christian Apologetics, not all of them valid or biblically sound. These are:

Most skeptics are people who avoid grappling with real-life problems. Further, they totally overlook the numerous passages in the Bible itself which encourage apologetic activity. This group is only a microscopic minority in Christendom, and has no serious thinkers or theologians advocating it.

CHRISTIAN RATIONALISM: According to this view, reason can completely demonstrate or prove the validity of the Christian position. Thus all what is needed is to place a comprehensive set of arguments in favour of the Bible in front of a person, and he would be able to see the truth. However, everyone knows that things are not as optimistic as this viewpoint maintains.

Christian Rationalism places too much trust in the capacity of the human intelligence/intellect in perceiving and recognizing truth. They have such faith in the wisdom of the fallen man that they often exclude the need or role of the Holy Spirit in illuminating the fallen and sinful human beings. Though very interesting, this viewpoint has never been widely accepted among Christian apologists.

LOGICAL CHRISTIANITY: According to this view, reason is the starting point of everything, and thus it goes a long way forward to the discovery of spiritual truth; the last steps of this process are taken by faith. This viewpoint is more Biblical than the first two, but it is still not fully correct.

Some proponents of the Logical Christianity view have gone to the extreme of claiming that since God can be known and understood through natural revelation alone, there is no need at all for the Bible. Christian Apologists have never/widely accepted this viewpoint.

REASON DEFINITELY AIDS FAITH: This is the most widely held view among evangelical and fundamentalist scholars. According to it, faith is the starting-point of everything in the Christian faith; once faith is established, it can be shown to be consistent with truth and reason. This is a viewpoint which is Biblically tenable and acceptable, and it will form the backbone of this series of studies on apologetics.

Thus the evangelical Christian apologist uses apologetics, not to create faith but to aid the creation and maintenance of faith. Even for this task he depends upon the role played by God the Holy spirit in helping communicate the message to people. The recipients also need the help of the Holy Spirit to understand and accept the message.

Other Lessons In Course 01 Lessons

This site uses Akismet to reduce spam. Learn how your comment data is processed.

An Earned Theological Degree Can Enhance Your Image Manyfold!

You Are the Only Person Who Can Change Your Life!

We Are Here To Help You! 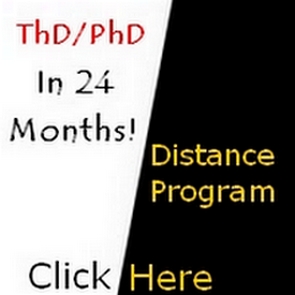 You Are the Only Person Who Can Change Your Life!

We Are Here To Help You!

Solutions For A Busy Person!